Should marinade incentivize pools with liquidity mining which disincentivize themselves?

Lifinity has recently launched dynamic fees. This made it such that all trading fees on the msol/USDC go to the lifinity protocol treasury and not LPs because the “target liqudity” is set to only $1mm. Does it make sense for marinade to incentivize a pool which so strongly disincentivizes meaningful amount of liquidity?

Additionally during the previous vote @Durden posted the following comment

which it seems lifinity has gone back on. 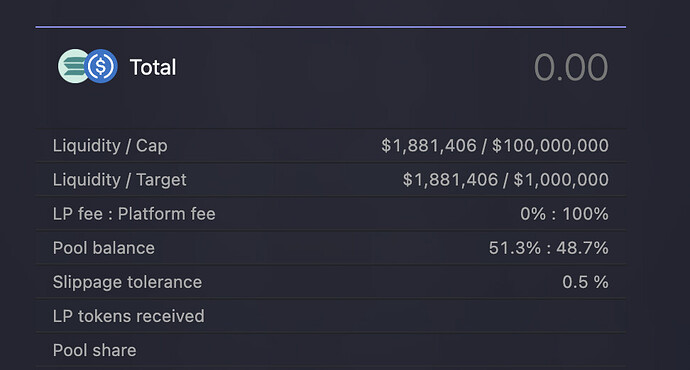 He will claim “dynamic fees were public knowledge & fully planned from even before our IDO 6 months ago” but it’s pretty clear the above is misleading (if not an outright lie) if that was the intention.

Plan to initiate a vote to remove lifinity liquidity gauges unless anyone has a better suggestion for how to proceed.

Seems like Solend should buy some veLFNTY if it wants to make governance decisions for Lifinity’s protocol.

The pool was opened, the MNDE rewards are available for all LPs to receive.

Sometimes one must wonder what your true intentions are, especially given the continued hostility and aggressiveness you show towards Lifinity, and its community.

Sometimes one must wonder what your true intentions are, especially given the continued hostility and aggressiveness you show towards Lifinity, and its community.

sometimes I wonder about the true intentions of lifinity/you. me? I want msol to have the most liquidity possible so that it remains a tier 1 asset on solend, I also want a large % of staked sol to be staked via marinade. I’m not sure why lifinity’s actions seem to be in opposition of these goals so I feel the need to say something.

sometimes I wonder about the true intentions of lifinity

Think it’s been pretty clear from the start, Lifinity wishes to be fairly compensated for providing liquidity to the mSOL/USDC pair, just as every other LP is compensated.

For being such a large MNDE token holder, and someone who cares so deeply about the success of Marinade, I would have guessed that you’d have at least read over Lifinity’s tokenomics series prior to doing any voting on proposals relating to their DEX or any pools they might open.

Some comments about market making are in order, lest there be confusion.

Generally speaking, the utility of each additional unit of liquidity does not increase linearly. To see this point, consider an asset for which daily volume averaged only $1k. For this asset, it doesn’t really matter whether it has $1M of liquidity or $100M of liquidity; it will make very little difference to the execution price that traders get. The trade sizes are so small that, beyond a certain point, additional liquidity doesn’t meaningfully reduce slippage.

This is what’s happening with Lifinity’s mSOL-USDC pool. There is an overabundance of liquidity, and as a result we had to adjust the pool’s concentration to protect LPs from the excessive liquidity that we were providing that opened LPs up to greater risk of impermanent loss than is necessary. (However, note that manually adjusting the concentration was never our long-term plan, only a temporary solution.)

For this reason, although dynamic fees disincentivize deposits, it does not affect the level of liquidity provided for mSOL, which is what really matters. Any confusion likely stems from how this is not the case on all other AMMs, where more deposits = greater liquidity provided.

Regarding the screenshot of my comment from a different thread, it sounds as if @nope is claiming that it was the key comment that led to proposal 16 failing to pass. It should be clear to anyone who has read through the thread that this is not the case. Indeed, the topic was not even the crux of the discussion, which centered around the pool being closed and external LPs not being able to access its MNDE rewards (both of which are no longer true).

My comment was intended to convey that Lifinity would not make an ad hoc change to the mSOL-USDC pool’s fee structure, as that’s what was being implied by the person I was responding to and the discussion was centered around that pool alone, not how Lifinity functioned as a whole (again, I encourage everyone to read it in context if they haven’t already). Dynamic fees for all our pools were planned from over 6 months ago, even before our IDO. They were announced in a Medium article, are explained in our docs, and I have always freely answered any questions people had about them.

Lifinity needs to make up its mind whether it’s a closed hedge fund which manages its own funds & shares market making profit with tokenholders, thus doesn’t need to participate in Marinade liquidity mining to support mSOL tvl growth via open defi participation, or a defi protocol/dex which encourages LPs to deposit with it to share in trading fees, whatever they may be. Clearly it wants to be the former yet pays lip service to the latter (especially in order to not get its LM gauge disabled: something which I guess many voters would reconsider on), now to the point of discouraging deposits.

To move so soon after the recent events to take action to actually dissuade LPs from adding to mSOL-USDC in Lifinity, is super disingenuous, and does not reflect well on the Lifinity team imo.

it does not affect the level of liquidity provided for mSOL, which is what really matters

Perhaps only in your world. A significant objective of the gauges is to support usage of & tvl growth of mSOL, which is conveniently ignored. No need for more smoke and mirror posts on ‘liquidity’ which ignore the wider topic

Lifinity has always known what it itself is, and has explained it publicly from the start. It’s a few loud voices in the Marinade community that have repeatedly told Lifinity to do things differently, to get it to fit some preconceived notion of how they think a DEX ought to function.

Not sure I understand why Lifinity needs to fit into your neatly defined yet imagined categories. Lifinity provides liquidity for mSOL and is incentivized to do so via MNDE rewards. This is the same as other DEXs. Lifinity functions differently with regards to other DEXs because other DEXs do not care about IL and thus are happy to have as much liquidity as possible, even if that means greater IL. Lifinity cares about IL, and thus has mechanisms to mitigate it, of which dynamic fees is one.

To move so soon after the recent events to take action to actually dissuade LPs from adding to mSOL-USDC in Lifinity, is super disingenuous, and does not reflect well on the Lifinity team imo.

Implementing a mechanism 6 months after we said we would is “soon”? In any case, this was planned from the very start, long before any Marinade governance discussion ever took place.

Perhaps only in your world.

I believe the point of LM gauges is to incentivise liquidity for mSOL, so the more (liquidity), the merrier, which implies any attempt to disincentivise deeper mSOL liquidity should be discouraged under the LM gauges. I don’t believe how long such disincentivisation was announced beforehand should play a role on how the LM gauges should react.

I’m surprised this even needs to be said, but if we open our pool it would function just like all our other open pools – no deposit/withdrawal fees, same LP share of fees, etc. We’re not so shortsighted as to open our pool in a manner that will only serve as a temporary loophole.

still surprised you need to say it @Durden?

Like I explained earlier, you’re thinking in terms of how other AMMs work, where more deposits = greater liquidity provided, because their design does not take IL into consideration.

In our case, additional deposits does not mean additional liquidity provided at the current price. If we didn’t adjust our concentration to match the current deposits, it would be to the detriment of our LPs.

Are you suggesting that we need to function the same way other DEXs do, ignore any IL risk, and keep concentration fixed regardless of deposits? Are we supposed to just “take it like a man”? This would obviously be a huge disservice to our LPs, and it would provide very little benefit to mSOL too. The level of liquidity that we are able to safely provide is a function of how much trading volume mSOL has. Without an increase in mSOL volume first, we cannot increase the level of liquidity we provide without getting rekt.

In case you are not aware, mSOL volumes have been quite muted recently. If its volume profile changes sufficiently, we will be able to accommodate more deposits without having to lower concentration.

And guess what, our mSOL-USDC pool still functions just like all our other open pools. Again, I was responding to your saying that we might “open the pool but put a 100% deposit fee”.

Regarding the screenshot of my comment from a different thread, it sounds as if @nope is claiming that it was the key comment that led to proposal 16 failing to pass. It should be clear to anyone who has read through the thread that this is not the case. Indeed, the topic was not even the crux of the discussion, which centered around the pool being closed and external LPs not being able to access its MNDE rewards (both of which are no longer true).

thats not true btw. I pointed out multiple times how Lifinity opening up the pool leads to conflict of interests, but you just swept them away with what turned out to be lies now.
I had the courtesy to not outright accuse you that you will be doing what you did without evidence at that time, but you did exactly what I was expecting you to do.
It’s pretty clear Lifinity can’t be trusted.

And guess what, you openly and actively misled and lied to mDAO to get make sure a proposal is voted on in your favor.

I didn’t sweep anything away, I provided responses to all your hypothetical accusations, and anyone can go read them. And your accusations were along the lines of Lifinity changing how only the mSOL-USDC pool would work, not protocol level changes, which have been laid out from long ago in plain sight. I’m not responsible for your ignorance of our development roadmap

ah yeah my bad for not explicitly pointing out every single way Lifinity can screw over external LPs, forgot the kindergarteners at Lifinity need that

your response was “no deposit/withdrawal fees, same LP share of fees, etc.” and that turned out to be a lie

Ah yeah my bad for not posting the entirety of our documentation in the thread so that we wouldn’t later be accused of trying to cover up a part of it, did not foresee that you may be too lazy to look into it yourself before criticizing us.

That was an explanation of how our pools functioned at the time, not a statement that our protocol had ossified around those parameters (which you would have understood if you had looked into our documentation). “if we open our pool it would function just like all our other open pools” – this still holds true.